Ecology and evolution of mutualist interactions

We investigate that ecological processes modulate mutualistic interactions between plants with their pollinators and seed dispersers, and how these interactions could also translate into evolutionary changes in the interacting agents. To do this, we combine tools from Population Ecology, Molecular Ecology, Network Theory, Signal Theory, Spatial Ecology, Movement Ecology and Eco-Evolutionary Dynamics to investigate: i) the impact of anthropic death on the interactions that occur between plants and their seed dispersers; ii) eco-evolutionary consequences of the introduction of domestic bees in mutualistic interactions between plants and their native pollinators; and iii) the evolution of phenotypic traits in complex structures such as flowers and fruits mediated by general mutual agents. 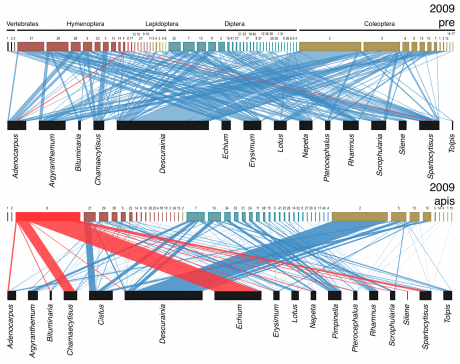 We currently have an ongoing funded research project in which we study the impact of death on the individual interactions that occur between plants and their seed dispersers. For this we will use the mutualist relations that operate in an endemic species of the Canary Islands (Neochamaelea pulverulenta, Rutaceae) and its only seed dispersers, the lizards (Gallotia spp., Lacertidae). The main objective is to purchase the characteristics of the network of individual interactions in populations of N. pulverulenta that host large lizards (G. stehlini; max. muzzle-sloach length; LHC: 280 mm) in Gran Canaria, with populations in Tenerife where small-to-medium-sized lizards (G. galloti; max. LHC: 145 mm) disperse the seeds. For this, we will use specific microsatellites to obtain the genetic profile of each dispersed seed and the excreta of the lizard. The aim is to build the individual mutualist network of plants and lizards to know what structural and functional changes are occurring in the mutualist network in the context of the non-random reduction of sizes of seed dispersers (death). This novel approach is highly useful for explaining, and being able to predict, the collapse of seed dispersal services that are occurring in populations and ecosystems. The expected results could also be of great applicability in the management and conservation plans of those threatened species that depend on mutualist agents for their survival and persistence. 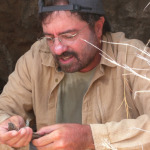