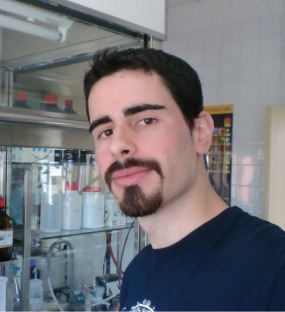 Daniel Cruz is a hired researcher under a science-transfer program funded by Cabildo de Tenerife, in which Dr. Juan Ignacio Padrón Peña is the IP.

Daniel A. Cruz obtained his B.Sc. in Chemistry and his M.Sc. in Chemistry Research in 2011 and 2012 respectively, from the University of La Laguna. Then, in 2017, he received his Ph.D. in Chemistry and Chemical Engineering from the same university, for his work in the development of synthetic methodology to generate oxacycles and alkyl halides by means of sustainable metals. This work was conducted under the supervision of Dr. Juan I. Padrón and Professor Víctor S. Martín García.

Then, during the years 2017–2019 he worked in different groups, the first being led by Professor José J. Fernández Castro from the University of La Laguna, where he worked on the extraction of marine natural products and preparation of pharmaceutical dosages against osteoporosis. Next, he moved to the University of Aarhus to work in Dr. Thomas Bjørnskov Poulsen's group, advancing the synthesis of natural product analogs. Then, he joined the pharmaceutical company Ceamed S.A. to work on the development of small molecules with anti-cancer activity.