Habitat destruction and the introduction of invasive alien species are two of the main problems threatening the conservation of birds on islands.

On 13 and 14 March the International Conference "Conservation of endangered island birds through the establishment of new populations and the restoration of habitat" was held on the island of Gran Canaria.

It was organised within the framework of LIFE+Pinzón, a project which has been financed to 60% by the European Union and developed jointly by the Gobierno de Canarias, the Cabildo de Gran Canaria, both partners in the project, and the public company TRAGSA.

The conference brought together more than 150 people, including members of the international scientific community, local and regional administrations, associations and groups concerned with the protection of nature.

During the two days of work, the event had the intervention of about twenty high-level researchers from islands such as Hawaii, Seychelles, Azores or Galapagos, who shared their experiences in different projects for the conservation of passerine birds developed in their geographical areas. According to Manuel Nogales, scientific researcher at the CSIC/director of the CSIC in the Canary Islands and external scientific advisor for the LIFE+Pinzón project, "problems on oceanic islands are recurrent and similar in the Pacific, Atlantic or Indian oceans".

The conservation experts explained the main problems they encounter when it comes to protecting bird species threatened by the human action.

Manuel Nogales said that "habitat destruction and the introduction of invasive alien species are two of the major problems affecting the conservation of passerine (songbird) species on islands. ​ The LIFE+Pinzón project, which is developed within the Red Natura 2000 , has as its main objective the expansion of the habitat and population of the pinzul (Gran Canaria blue chaffinch), an endemic bird and small passerine that inhabits the pine forest of the Canary Islands and is considered "endangered" by the Red List of Threatened Species of the International Union for the Conservation of Nature (IUCN).

To tackle these problems, the project launched on the island of Gran Canaria in 2015 proposes the creation of sustainable population areas in the pine forests of the Central Summit and ecological corridors between the pine forests of Inagua and those of the Central Summit by planting 80,000 Canary Island pines on public and private land so that the Gran Canaria blue chaffinches can move and colonize to increase their population. It is currently estimated that the population of blue chaffinches in Gran Canaria ranges between 300 and 350 individuals. 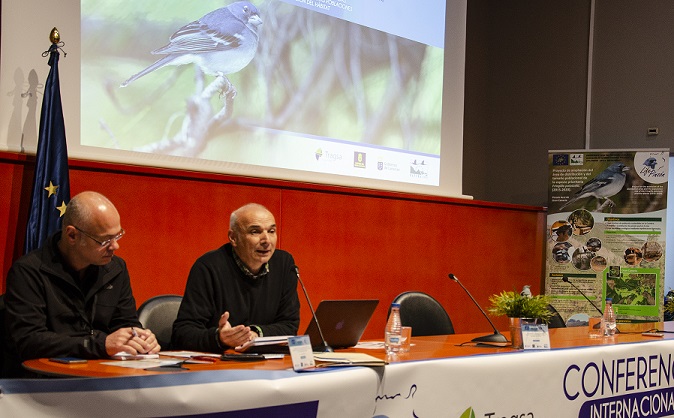 The two-day conference, as well as the field visit on Friday, had a high participation of attendees both residents in the archipelago and from Spanish mainland and Central Europe, who gave a very positive assessment of the days.

The conference book is published on the website of the project (www.lifepinzon.org) and the papers will be published soon.