The draft bill for the protection, rights and welfare of animals: a new threat to biodiversity and public health

This draft bill contains positive aspects in relation to the elimination of mistreatment and other areas related to the welfare of domestic animals. However, if approved as currently drafted, it would be a huge step backwards in relation to the conservation of native biodiversity, especially on islands.

Among other issues, this draft bill seeks to implement TNR (trap-neuter-return) methods to control stray and feral cats. This approach, in addition to being unfeasible, clashes head-on with the basic biodiversity conservation regulations in force in our country (Law on Natural Heritage and Biodiversity, and the Royal Decree regulating the Spanish catalogue of invasive species) as well as with the fundamental European Directives on nature conservation (Birds and Habitats Directives).

Cats are included in the list of the most damaging invasive alien species for the native fauna of islands. In fact, it is known that in the Canary Islands their diet is composed of at least 68 species: 5 mammals, 16 birds, 15 reptiles and 32 invertebrates. Most of these birds, reptiles and invertebrates are endemic species, and some are at serious risk of extinction, such as the blue-finch (Fringilla polatzeki), or giant lizards of El Hierro (Gallotia simonyi), La Gomera (G. bravoana) and Tenerife (G. intermedia). Indeed, the main conservation problem for these last three species is precisely predation by cats, but not only by feral individuals. Due to the proximity of the last populations of giant lizards to human population centres, both domestic and stray cats are also part of this serious threat to them. Therefore, the conservation of these endemic and endangered species is completely incompatible with the presence of cats in open spaces. Even if they are well fed, they do not lose their natural instinct and continue to prey on native fauna, in natural, rural and even urban environments. 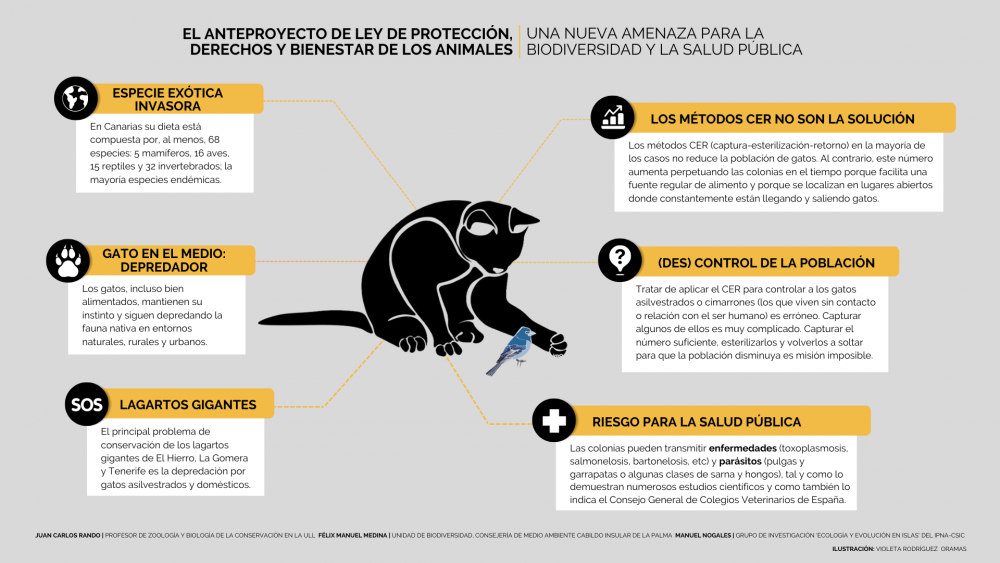 The draft bill for the protection, rights and welfare of animals leaves the impression that the use of the TNR method to control both feral cats and cat colonies in rural and urban environments is not only effective, but the "ethical" method to solve this problem and reduce their numbers. The same is advocated by supporters of cat colonies. However, they neglect to mention that in the vast majority of cases this method does not reduce the number of cats, which, on the contrary, usually increases when this method is applied. This is indicated by the available scientific data, and is also publicly attested to by colonies of cats that remain in one place indefinitely when food is continuously offered to them. There is a simple explanation for this. Cats are solitary animals, which only form small family groups during the brief time a female cat lives with her young kittens. Therefore, indefinite groupings of cats only occur when there is a constant and predictable food source, as is the case artificially in colonies. On the other hand, one would think that it would be easy to capture these cats, neuter them and release them again so that the colony does not grow in numbers and eventually disappears. However, this is not the case, because these cats do not live in a closed space; they can move around unhindered and new individuals continually join the colony. To reduce the number of cats in an open population it is necessary to sterilise almost all the members of the colony, which is very difficult, in fact often impossible to achieve. Therefore, this method fails in practice, as has been demonstrated on many occasions. This is also why it is nonsensical to try to control feral cats - those that live in the wild without any contact or relationship with humans - by this method. Capturing only some of these elusive cats is a very complicated and difficult mission, trapping enough of them to sterilise and release them back into the wild so as to reduce their population is in fact impossible. Moreover, the draft bill itself prohibits the abandonment of cats, both indoors and outdoors, so this proposal is yet another incongruity in this draft bill and makes no sense whatsoever.

As noted above, we must not forget that well-fed felines continue to prey on wildlife, whether they are from stray-cat colonies or domestic cats with access outside their homes, even if they reside in urban environments. In many cases, these are endemic island species or subspecies, for instance the Canary Islands chiffchaff Phylloscopus canariensis, African blue tit Cyanistes teneriffae, canary Serinus canaria, blackcap Sylvia atricapilla Heineken, and blackbird Turdus merula cabrerae. Several of them are included in the List of Wild Species under Special Protection Regime (Royal Decree 139/2011 of 4 February) and therefore protected by law. These practices are therefore not acceptable from the point of view of conservation of these populations of native species in urban areas.

In addition to what has already been mentioned, there is an issue of great importance and interest in relation to cat colonies that neither the draft bill on the protection, rights and welfare of animals, nor the defenders of cat colonies mention. It is the risk that this practice poses to public health. Constant presence of cats in public spaces is a health risk for people and domestic animals, as there are many zoonoses that they can spread, such as toxoplasmosis, salmonellosis, bartonellosis, etc. In relation to these risks, it is necessary to mention that the Consejo General de Colegios Veterinarios de España (General Council of Veterinary Associations of Spain) - an organisation that brings together all veterinarians who, in accordance with the laws in force, exercise their profession in any of its modalities, either independently or in the service of the Spanish Central State Administration, the Regional or Local Authorities, or any other public or private entity - published a report (May 2021) on "Cat colonies and sanitary control". This report clearly highlights the public health risks posed by cat colonies and indicates that cats are domestic animals that should not live in the street and that their grouping in colonies are very dangerous active sources of diseases for the cats themselves and also potential sources of diseases for people. Among the problems associated with cat colonies, the report states: "Public health risk: Uncontrolled animals can be transmitters of known zoonotic diseases such as toxoplasmosis, bartonellosis, chlamydia, rabies or Lyme disease, as well as being a point of necessary control of other possible zoonotic diseases such as COVID 19 or some strains of human influenza. They can also act as transmitters of parasites, such as fleas and ticks or some kinds of scabies and fungi".

In view of the considerations above, numerous conservation groups and researchers (several Spanish universities and the CSIC) have presented allegations to this draft bill in an attempt to contribute knowledge, coherence and common sense to the text presented. Among the recommendations made are that, both to guarantee the welfare of the animals and to reduce the predation rates they cause to native fauna, a ban should be established on keeping these animals in places where they cannot be adequately controlled, in order to minimise their access to public spaces. On the other hand, it is recommended, in relation to cat colonies, that it is essential that they are located in closed enclosures, so that cats cannot enter or leave them and that, in addition, all the animals inside are sterilised. Under these conditions, i.e. a closed population with all individuals neutered, the colony will be reduced in the short term. Finally, the management of feral cats, i.e. those that live in the environment without contact with humans, should be excluded from this draft bill, as their management should be carried out in accordance with Law 42/2007 on Natural Heritage and Biodiversity, as well as Royal Decree 630/2013, of 2 August, which regulates the Spanish Catalogue of invasive alien species, i.e. they should be considered invasive alien species in accordance with the EU Directives on Habitats and Birds.