A simple epimerization of C-(α-D-Gly p )methanol into C-(β-L-Gly p )methanol compounds is described. The radical sequence involved homolytic cleavage of the C5–H bond by 1,5-hydrogen atom transfer promoted by the 1’-O-yl radical and subsequent hydride addition with inversion of configuration. This methodology allows the preparation of rare C-(β-L-Ido p )-, C-(β-L-Altp)-, C-(β-L-Gulp)-, C-(β-L-Allp)methanol glycosides starting from carbohydrates of the D-series. It can also be applied to transform L- into D-configured C-glycosyl compounds, as illustrated by the formation of C-(β-D-6dGulp)- and C-(β-D-6dAltp)methanol from readily accessible L-rhamno and L-fuco analogs, respectively. In further development of this procedure compounds with C-(β-L-Araf)- and C-(β-L-5dRibf)methanol structures have also been synthesized. The alkoxyl radicals were generated by reaction of the corresponding N-alkoxyphthalimides with nBu3SnH(D) and in comparative terms, by visible light-photocatalysis using the Hantzsch ester/fac-Ir(ppy)3 procedure. The influence of the sugar ring conformation and the electronegativity of the substituents on the stereochemical outcome will be addressed. 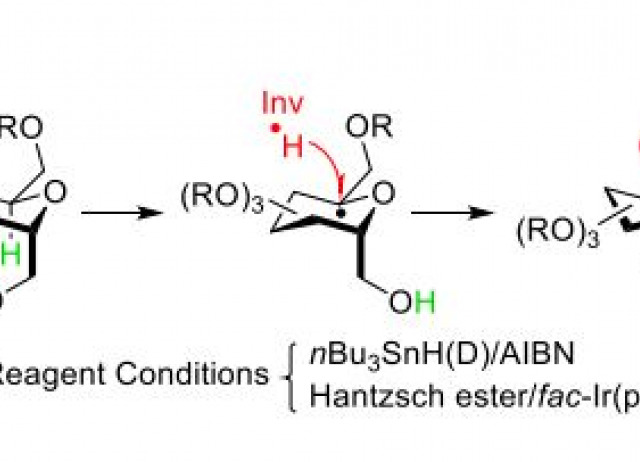 Free-living amoebae of Acanthamoeba spp. are causative agents of human infections such as granulomatous amoebic encephalitis (GAE) and Acanthamoeba keratitis (AK). The exploration of innovative chemical entities from natural sources that induce intrinsic apoptotic pathway or a Programmed Cell Death (PCD) in Acanthamoeba protozoa is essential to develop new therapeutic strategies. In this work, the antiamoeboid activity of squamins C–F (1–4), four cyclooctapeptides isolated from Annona globiflora was tested in vitro against Acanthamoeba castellanii Neff, A. polyphaga, A. quina, and A. griffini, and a structure–activity relationship was also established. The most sensitive strain against all tested cyclooctapeptides was A. castellanii Neff being the R conformers of the S-oxo-methionine residue, squamins D (2) and F (4), the most active against the trophozoite stage. It is remarkable that all four peptides showed no cytotoxic effects against murine macrophages cell line J774A.1. The analysis of the mode of action of squamins C–F against A. castellanii indicate that these cyclopeptides induced the mechanisms of programmed cell death (PCD). All peptides trigger mitochondrial damages, significant inhibition of ATP production compared to the negative control, chromatin condensation and slight damages in membrane that affects its permeability despite it conserves integrity at the IC90 for 24 h. An increase in reactive oxygen species (ROS) was observed in all cases. 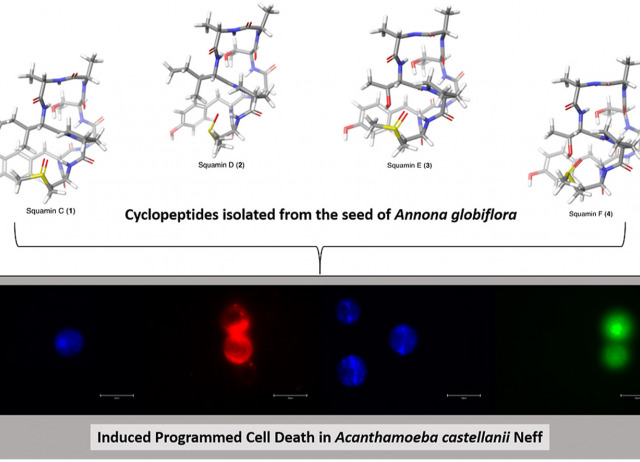 Invasive snakes represent a serious threat to island biodiversity, being responsible for far-reaching impacts that are noticeably understudied, particularly regarding native reptiles. We analysed the impact of the invasive California kingsnake, Lampropeltis californiae—recently introduced in the Canary Islands—on the abundance of all endemic herpetofauna of the island of Gran Canaria. We quantified the density in invaded and uninvaded sites for the Gran Canaria giant lizard, Gallotia stehlini, the Gran Canaria skink, Chalcides sexlineatus, and Boettger's wall gecko, Tarentola boettgeri. We used spatially explicit capture-recapture and distance-sampling methods for G. stehlini and active searches under rocks for the abundance of the other two reptiles. The abundance of all species was lower in invaded sites, with a reduction in the number of individuals greater than 90% for G. stehlini, greater than 80% for C. sexlineatus and greater than 50% for T. boettgeri in invaded sites. Our results illustrate the severe impact of L. californiae on the endemic herpetofauna of Gran Canaria and highlight the need for strengthened measures to manage this invasion. We also provide further evidence of the negative consequences of invasive snakes on island reptiles and emphasize the need for further research on this matter on islands worldwide. 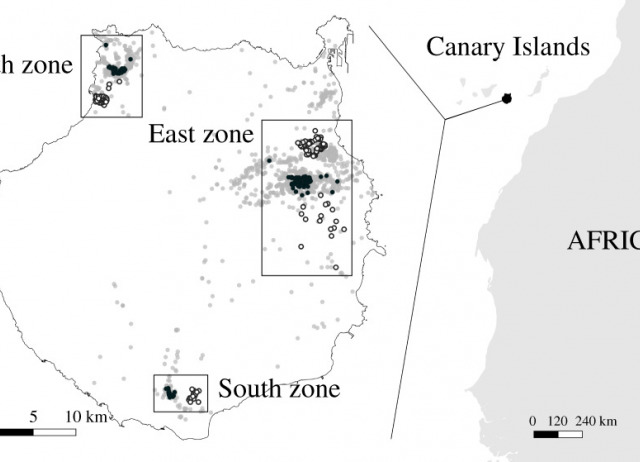 The site-selective modification of peptide backbones allows an outstanding fine-tuning of peptide conformation, folding ability, and physico-chemical and biological properties. However, to achieve selectivity in the core of these biopolymers is challenging. In the last few years, many advances towards this goal have been developed. This review addresses the selective modification of Cα- and N-positions, from the use of “customizable units” to the residue-directed introduction of substituents. The site-selective modification of the peptide bond, i.e. the formation of thioamides or heterocycles, which alters backbone rigidity and ability to form hydrogen bonds or recognition by enzymes, is also described. Moreover, not only the modifications in internal backbone positions, but also in the N- and C-termini are discussed. In addition to chemical methodologies, the review addresses some reactions, catalyzed by natural or engineered enzymes, that afford unprecedent regio- and stereoselectivity in backbone modifications.

Aims: To analyse the relationship among air pollutants, markers of inflammation and infarct size in patients with acute coronary syndrome (ACS). Methods: This was a prospective analysis of consecutive patients admitted to hospital because of ACS. Cardiac biomarkers were drawn. The daily mean values of the air pollutants from the day before until 7 days before admission were analysed. The study population was stratified according to infarct size, based on median peak troponin value. Results: Patients were divided into two groups of 108 subjects each, according to median peak troponin value. Patients with extensive MIs had a higher neutrophil:lymphocyte ratio and leukocyte and neutrophil counts than patients with smaller MIs. In addition, they were exposed to higher concentrations of sulphur dioxide (9.7 ± 4.1 versus 8.4 ± 3.1 μg/m3 ; p=0.009) and lower concentrations of ozone (33.8 ± 13.7 versus 38.6 ± 14.5 μg/m3 ; p=0.014). Multivariate analysis showed that sulphur dioxide levels (OR 1.12; 95% CI [1.031–1.21]; p=0.007) and neutrophil/lymphocyte ratio (OR 1.08; 95% CI [1.011–1.17]; p=0.024) were independent predictors of infarct size. Conclusion: Patients with extensive MIs had higher white cell inflammatory levels and had been exposed to higher sulphur dioxide concentrations in the ambient air. 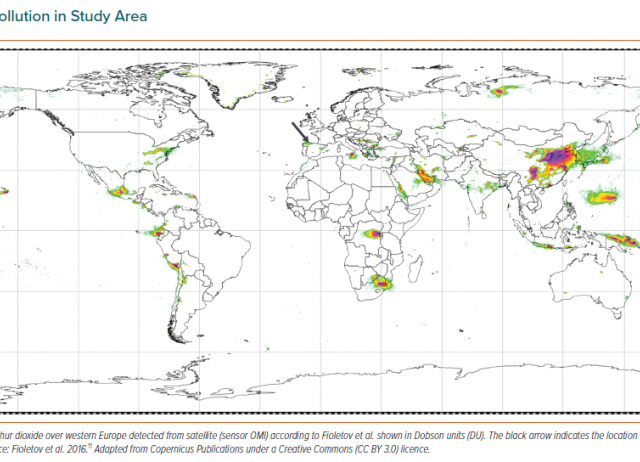 Carbamate-bearing benzylated aminosugars undergo an I2/I(III)-promoted intramolecular hydrogen atom transfer (IHAT) followed by a nucleophilic attack to provide polycyclic structures. Thus, suitably positioned benzyl ethers are surgically oxidized into the corresponding mixed N/O-benzylidene acetals, which can be conveniently deprotected under mild acidic conditions to grant access to selectively O-deprotected aminosugars amenable for further derivatization. The scope of this strategy has been proven with a battery of furanosic and pyranosic scaffolds. Preliminary mechanistic studies, including Hammett LFER and KIE analyses, support a reaction pathway with the nucleophilic cyclization as the rate-determining step. 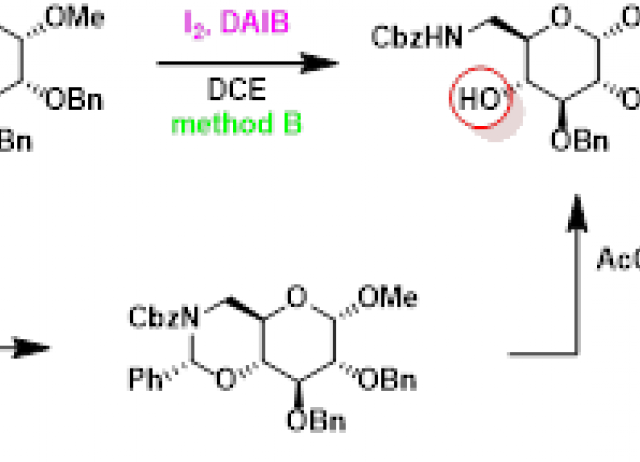 We investigated the sources and processes affecting the vertical distribution of tropical PMx aerosols (particulate matter -PM- smaller than 10, 2.5 and 1 μm, PM10, PM2.5 and PM1, respectively) in the low troposphere of Santo Antão and São Vicente islands, in Cape Verde archipelago, a region where a better understanding of aerosols is needed due to their involvement in tropical meteorology and their impact on air quality, ocean and climate. We found that local sources had a low-scale impact. From transect measurements at ground level, we found that PMx levels were predominantly low, except near to PMx sources, where distinctive PM1 / PM2.5 ratios were measured, linked to vehicle exhaust (0.96), biomass burning (0.67) and Cape Verdean dust (0.36) emissions. The depth of the marine boundary layer (MBL) and the vertical distributions of PMx showed wide variability prompted by meteorological conditions. The trade winds prevailed in the MBL, whereas other airflows were situated above it: North-Atlantic, African easterly airflow and Saharan Air Layer. Under North-Atlantic airflow conditions, the MBL extended to 1400 m above sea level (m.a.s.l.). Above this altitude, PMx concentrations decreased quickly (< 3 μg/m3) due to the free troposphere conditions. Under Saharan dust conditions, the MBL was confined to just 70 m.a.s.l., whereas a complex dust stratification was observed above, characterized by alternating dry air layers with high dust loads (PM10 ~ 100 μg/m3) and more humid air layers with lower aerosol loads (PM10 ~ 40 μg/m3). Within the dry easterly African airflow occurring above the marine stratocumulus typical of the MBL top (placed at 500 m.a.s.l.), we detected layers enriched in hydrophilic aerosols (PM10: ~ 8 μg/m3). These were imbedded in relatively humid air (RH ~48%), probably linked to secondary aerosol formation by in-cloud processes in the marine stratocumulus situated below. We found that PMx transport from North Africa, both under dust and dust-free conditions, is associated with complex vertical stratifications, even within the dusty Saharan Air Layer. 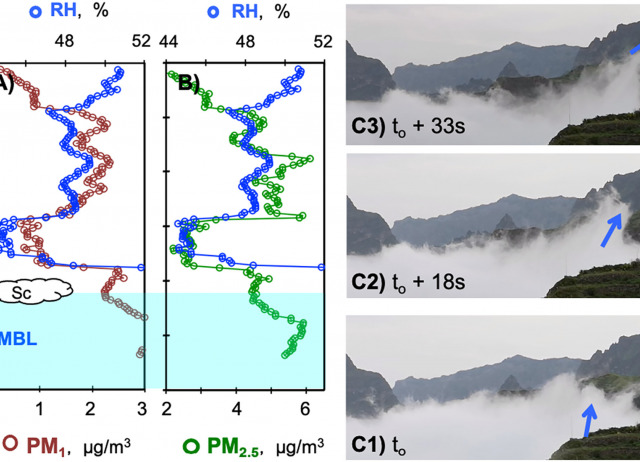 The therapeutic potential of novel isobenzofuranones against Naegleria fowleri

The Free-Living Amoeba species, Naegleria fowleri is the causative agent of a lethal encephalitis known as Primary Amoebic Encephalitis (PAM). Moreover, most of the reported cases are often related to swimming and/or diving in aquatic environments. In addition, the current therapeutic options against PAM are not fully effective and hence, there is an urgent need to develop novel therapeutic agents against this disease. Previously isobenzofuranones compounds have been reported to present antiprotozoal and antifungal activity among others. However, to the best of our knowledge, these molecules have not been previously tested against N. fowleri. Therefore, the aim of this study was to evaluate the activity of 14 novel isobenzofuranones against this pathogenic amoeba. The most active and less toxic molecules, were assayed in order to check induction of Programmed Cell Death (PCD) in the treated amoebae. The obtained results showed that these molecules were able to eliminate N. fowleri trophozoites and also induced PCD. Therefore, the tested isobenzofuranones could be potential therapeutic candidates for the treatment of PAM. 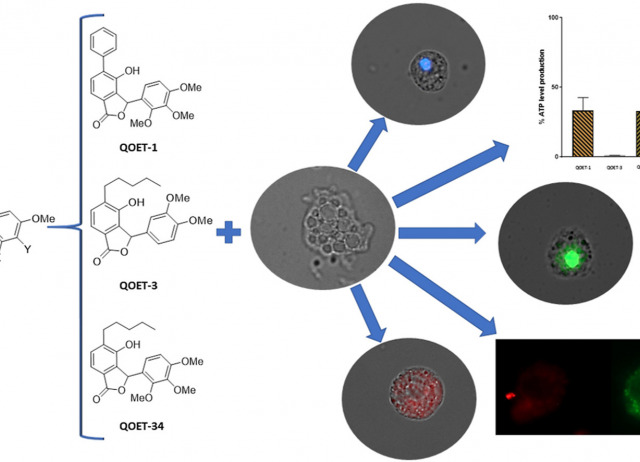 Dispersal limitations and long-term persistence drive differentiation from haplotypes to communities within a tropical sky-island: evidence from community metabarcoding

Neutral theory proposes that dispersal stochasticity is one of the main drivers of local diversity. Haplotypes-level genetic variation can now be efficiently sampled from across whole communities, thus making it possible to test neutral predictions from the genetic to species-level diversity, and higher. However, empirical data is still limited, with the few studies to date coming from temperate latitudes. Here, we focus on a tropical mountain within the Transmexican Volcanic Belt to evaluate spatially fine-scale patterns of arthropod community assembly to understand the role of dispersal limitation and landscape features as drivers of diversity. We sampled whole-communities of arthropods for eight orders at a spatial scale ranging from 50 m to 19 km, using whole community metabarcoding. We explored multiple hierarchical levels, from individual haplotypes to lineages at 0.5, 1.5, 3, 5, 7.5% similarity thresholds, to evaluate patterns of richness, turnover, and distance decay of similarity with isolation-by-distance and isolation-by resistance (costs to dispersal given by landscape features) approaches. Our results showed that distance and altitude influence distance decay of similarity at all hierarchical levels. This holds for arthropod groups of contrasting dispersal abilities, but with different strength depending on the spatial scale. Our results support a model where local-scale differentiation mediated by dispersal constraints, combined with long-term persistence of lineages, is an important driver of diversity within tropical sky islands. 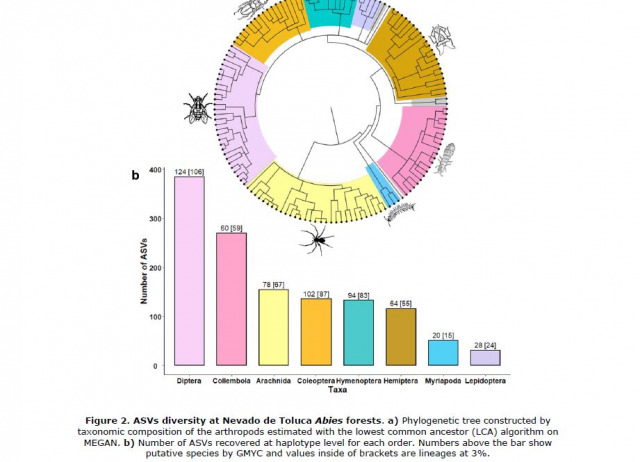 Aim: Much research has focused on the separate and combined effects of habitat and geography on species communities, both in mainland and island ecosystems. However, few studies have looked into the differences among communities inhabiting different island habitats. Here we aim to determine the contributions of habitat filtering and dispersal to the differences in taxonomic structure of island communities across geographic scales. Location: Sixty plots in two habitats (forest and dry habitat) across eight islands of the Macaronesian archipelagos of the Azores, Madeira, Canary Islands and Cabo Verde. Taxon: Spiders (Araneae). Methods: We generated community data by using the optimised and standardised COBRA sampling protocols. We tested the differences in three beta diversity metrics ( βTotal, βReplacement and βRichness) for each habitat and dispersal category separately, across geographic scales through nested non-parametric PerMANOVA. We tested if dispersal and habitat influenced differences between the communities of the same area by applying a PERMDISP to βreplacement, and using the distances in linear mixed models. We tested the effects of habitat and dispersal on species relative abundances (SADs) and rarity by building Gambin models for each community and dispersal group separately. Results: Communities grouped according to archipelago and habitat, in terms of taxonomic similarity. In general, β diversity increased with geographic scale, and was greater in dry habitats. βReplacement among communities of the same region was greater in dry habitats than in forests, and this difference was stronger for rare ballooners. Dry habitat communities showed more species with low abundances (rare species) at different spatial scales. Main conclusions: Our findings reveal that habitat type does not only condition the processes behind community assembly but also the scale at which they occur. Indeed, our findings are highly relevant for theories on across and within island community assembly as well as for biodiversity conservation. 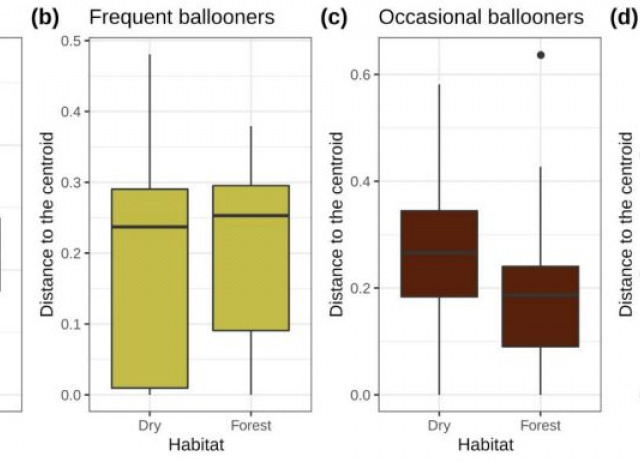