More comprehensive and accurate data on the deformation of the Earth's surface will allow us to improve seismic hazard maps, as well as the prediction of future volcanic eruptions. A research that included Dr. Pablo J. González, a researcher from the Volcanology group of IPNA-CSIC, has generated a detailed high-resolution map of the movement of a complete tectonic plate for the first time: the Anatolian plate in and around northern Turkey.

Fifty years ago, the world of geology was transformed by the introduction of the plate tectonic theory: a new conceptual framework for understanding the formation of continents and oceans, as well as the distribution of volcanoes and mountain belts. This model describes the movement of the Earth’s cold, rigid surface layer, the Earth's lithosphere (the crust and uppermost mantle). In the 1960s, scientists worked out these past crustal movements estimating ages for the ocean floor, using paleo-magnetic geophysical measurements. It was not until the 1980s that the precise velocity of the current plates’ movements could be determined, with the use of geodetic data from artificial orbiting satellites and radio telescopes. Such precise measurements were and are still recorded from a very limited number of surface points, equipped with GPS stations or large astronomical observatories. Progressively but slowly, it has been possible to increase the amount and density of land surveyed, thus improving the accuracy of our maps and permitting safer navigation. However, while some countries have large measurement infrastructures, the vastness of the Earth's surface has prevented these movements from being observed and characterized in detail, with high spatial resolution.

Since the late 1990s, radar satellite interferometry has enabled researchers to capture maps of ground motion with high spatial resolution. However, the limited availability of these satellites prevented the use of this technology to generate continuous maps. This changed at the end of 2014, when the Sentinel-1 satellites of the European Space Agency were used for global high-resolution observation of crustal movement, by means of their interferometric radar sensors (InSAR). The information collected by this mission also has an open data policy, which makes it a valuable resource for research.

This project's research team has used a supercomputer in the UK that stores a copy of all mission data. Through millions of hours of calculation, thousands of radar images have been processed to obtain the first map of the surface movement of a complete tectonic plate (Fig. 1).

Surface deformation measurements are essential for medium and long-term seismic hazard assessment. While it is worth noting that earthquake prediction is not possible at present, advances such as that aided by this study bring us a little closer to that goal. Researchers have developed new automated systems for processing InSAR images and explored the first five years of Sentinel-1 data. This has enabled the study of surface movements in the Anatolia region (approximately 800,000 km2). The new three-dimensional velocity maps (north, east and vertical component) along with the horizontal deformation rate reveal the most detailed deformation maps available today. The maps are dominated by the westward movement pattern of Anatolia in relation to the Eurasian continent. The rate of deformation accumulation is localized along the large tectonic faults to the north and east of the Anatolian plate (Fig. 2), while the vertical signals are rapid and associated with anthropogenic activities such as groundwater extraction (Fig. 1C). To a lesser extent, the vertical component also captures the tectonic extension associated with the grabens (longitudinal valleys) of western Anatolia. 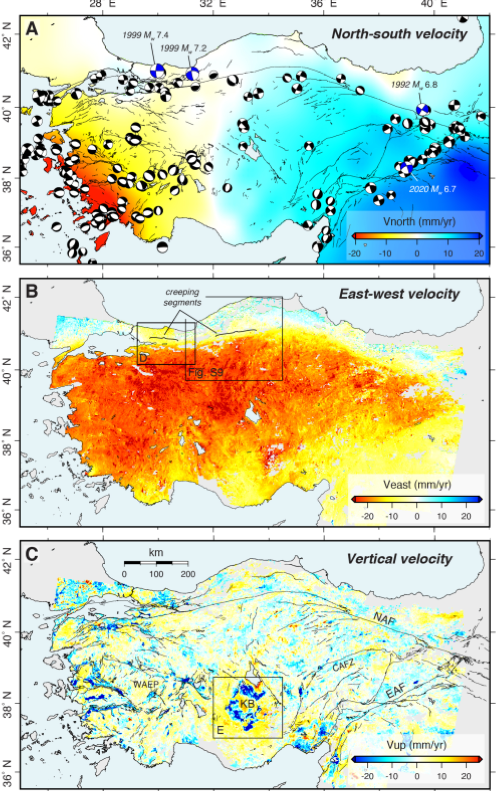 This research shows that the use of Sentinel-1 satellite data, together with its massive and automatic InSAR processing, can allow the development of a very detailed characterization of both velocity fields and strain rate, with high resolution and accuracy and across large regions of the continents. These results are significant for the assessment of the relationship between the rate of accumulation and release of stresses in the Earth's crust rocks associated with damaging earthquakes.

To learn more, check the article here: "High-resolution surface velocities and strain for Anatolia from Sentinel-1 InSAR and GNSS data".

This article has been published at The Conversation. Read it here.