For the first time, a scientific study shows how a beetle species (Coleoptera) distributed along the entire altitudinal gradient of an island is capable of adapting its morphology, biology, ecology and life-cycle activity, depending on the altitude at which it lives and the prevalent climatic conditions.

This was discovered by a scientific team made up of Heriberto López and Manuel Nogales - Institute of Natural Products and Agrobiology (IPNA-CSIC), Sandra Hervías - Mediterranean Institute for Advanced Studies (IMEDEA-CSIC), and Helena Morales and Salvador de La Cruz - Tenerife Entomological Research Group (GIET). A study of an endemic coleopteran, the darkling beetle Pimelia laevigata costipennis, was carried out on El Hierro over the period of a year. Its populations were surveyed at sites along the entire altitudinal gradient of the island, from sea level to the summit. Body measurements were taken of individuals and also of numbers and sizes of eggs and clutches. Climatological measurements were also recorded in plots of terrain at a range of altitudes (elevations).

For the same period of time, very different environmental characteristics were detected between the high and low altitudes of the island, leading to two very different ecological scenarios for this Pimelia. At low altitudes, rainfall is scarce throughout the year and high temperatures appear very early after the winter rains. Therefore, the annual period of humid environment is short and its main food, the green herb cover on the ground, is scarce and short-lived near the coast. On the other hand, at higher altitudes, rainfall is more abundant and prolonged over time and temperatures remain moderate for more months. This means that the annual period of wet weather lasts almost until the summer season, allowing greater ground cover with fresh grass until almost the beginning of summer.

These very different conditions have meant that specimens of the same coleopteran species have modified their morphology, biology and ecology according to where they live, in order to survive and perpetuate their populations in the most effective way. Thus, at the lower altitudes of the island, with worse environmental conditions for them, Pimelia has a smaller body size. It concentrates its activity seasonally, ceasing to be active there in mid-summer. Moreover, its reproductive cycle lasts a only few months in winter and spring, during which the females lay a small number of large eggs. In contrast, at higher altitudes, higher humidity, moderate temperature and the availability of fresh herbs and grasses allow Pimelia specimens to grow larger and remain active until autumn. In this case, the reproductive cycle lasts until after the summer, when the females lay a larger number of small-sized eggs. This morphological, biological and ecological plasticity is the result of thousands of years of evolution of this beetle in the habitats it colonizes.

At low altitudes, where there are fewer food resources, females are not able to produce clutches with many eggs, as this requires considerable energy expenditure. This is why the clutches contain few but larger eggs, so that the larvae that hatch are therefore larger and better prepared to grow in a poor environment. Despite this, the smaller amount of food present at lower altitudes means that the larvae grow to a smaller size than at higher altitudes, giving rise to smaller adults.

On the other hand, at high altitudes, the environment is rich in food, which allows the females to lay larger numbers of eggs. In this case, the eggs are smaller because there is no need for the larvae to hatch already large and equipped with reserves to cope with development in a poor environment, the contrary situation. They hatch in an environment without a food shortage and soon reach a considerable size, which causes the adults to be larger than at lower elevations. 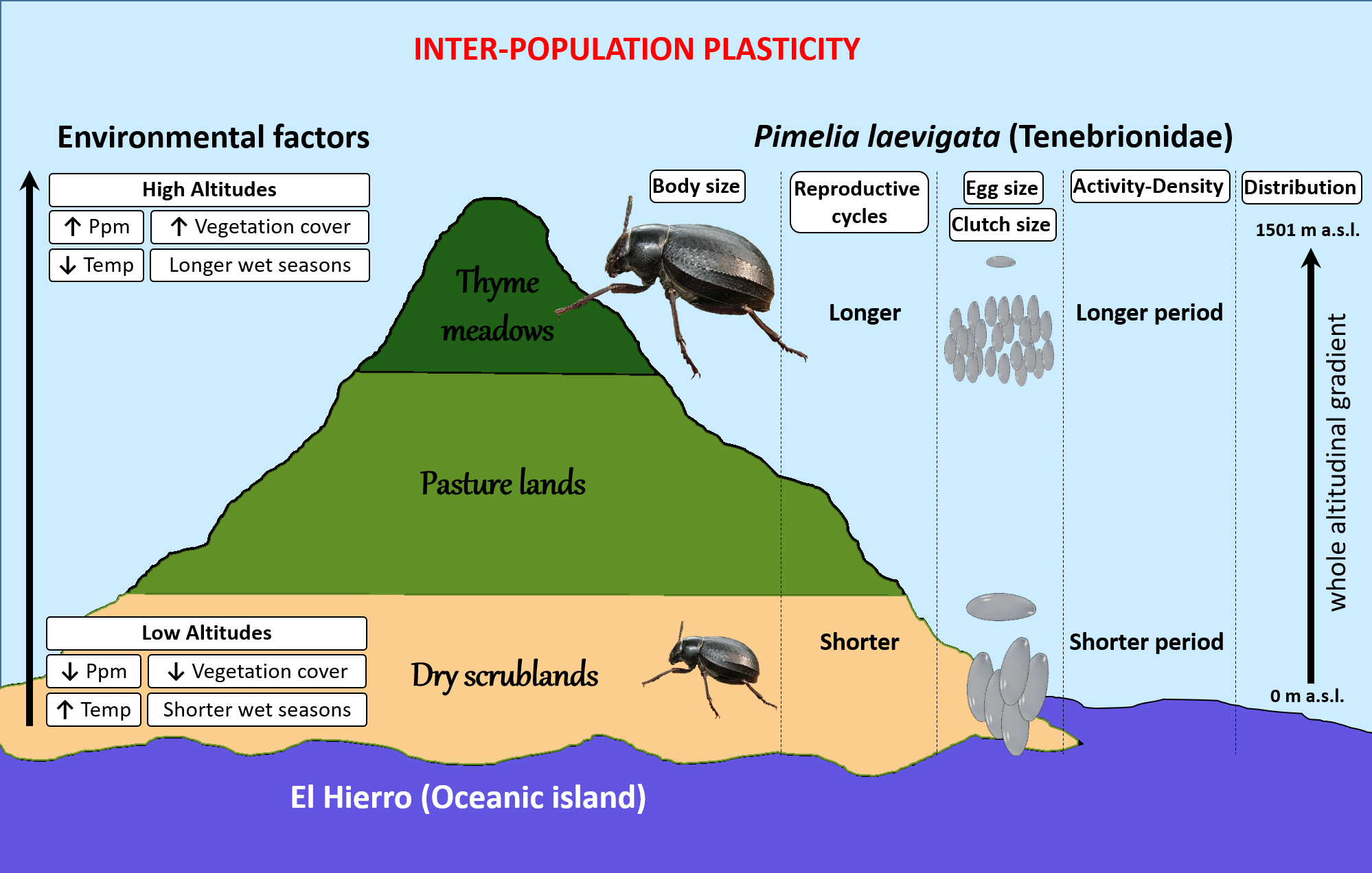 The Canary archipelago is a small natural laboratory that allows us to explore phenomena that cannot be studied in immense continental systems. In this case, El Hierro and Pimelia laevigata have given us the opportunity to discover how this endemic beetle has modulated its biology and ecology to adapt to both the coastal areas and the summit of the island, depending on environmental factors, and thus maintain its populations.

The article has been published in the journal Insects and has been classified as a Feature Paper. This category includes articles selected by the editorial team as representing cutting-edge research with a potential for high impact in the field.