A new method that allows the complete control of the regioselectivity of the hydrobromination reaction of alkenes is described. Herein, we report a radical procedure with TMSBr and oxygen as common reagents, where the formation of the anti-Markovnikov product occurs in the presence of parts per million amounts of the Cu(I) species and the formation of the Markovnikov product occurs in the presence of 30 mol % iron(II) bromide. Density functional theory calculations combined with Fukui’s radical susceptibilities support the obtained results. 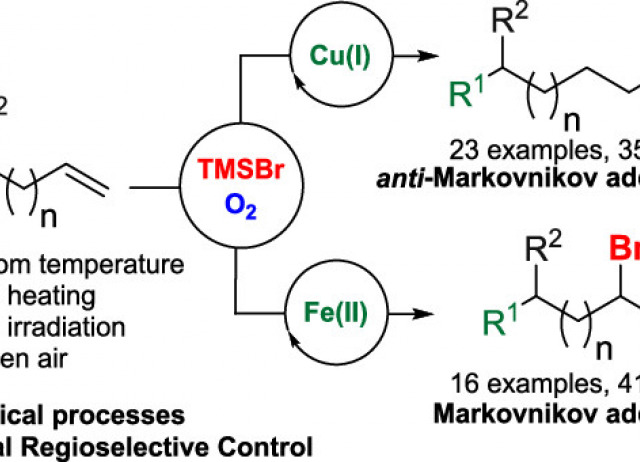 Lotus eremiticus is an endemic species from La Palma World Biosphere Reserve. It has a small distribution range, low population size, and is threatened by introduced herbivores. Since these threats have not been removed from the protected area, they were excluded by building a fence. The land where the species grows is private property, so an agreement with the landowner was reached to permit measures to favor its recovery. During 2008-2019, as a result of this agreement and the conservation efforts, a large population increase occurred, from the initial 5 individuals to the 30 plants that are currently distributed at the original site. Furthermore, these measures allow the species to maintain stable population dynamics, meaning that this endangered species is itself capable of recovery if the threat is removed. This is a good example of how land stewardship is an effective tool to conserve endangered species. 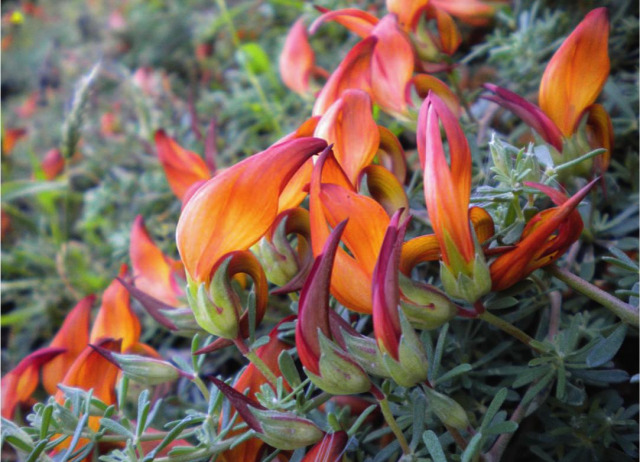 Bulk and compound-specific δ13C and n-alkane indices in a palustrine intermontane record for assessing environmental changes over the past 320 ka: the Padul Basin (Southwestern Mediterranean realm)

Here we provide valuable information about the palaeoenvironmental evolution of Southwestern Mediterranean region during the last ca. 320 ka through a biomarker-based study of the longest continuous continental Quaternary record in the Iberian Peninsula. The n-alkane content and δ13C values of these lipids were measured in 300 samples taken from the uppermost 55 m of the Padul Basin (PB) record. The δ13C signal of long-chain n-alkanes was a reliable proxy for C4/C3 terrestrial vegetation composition in the basin, as emergent macrophytes made a minor contribution to these homologues. In contrast, the δ13C values of C23 and C25 alkanes reflected mainly phases of increasing water level of the lacustrine/palustrine water body since aquatic macrophytes contain a large proportion of these compounds. Low δ13C values were attributed to a marked contribution of plants using the C3 photosynthetic pathway. Intervals with the lowest δ13C values were attributed to an important input of angiosperms, although they could also be explained by changing environmental conditions or environmental stress, as large shifts in δ13C occurred in long-chain homologues typically abundant in terrestrial plants. Shifts in δ13C of medium-chain homologues reflected limited CO2 availability induced by water temperature, salinity, pH, enhanced productivity, low atmospheric pCO2, or stagnant barriers, rather than the abundance of aquatic macrophytes. Our results also suggest enhanced isotopic fractionation during lipid synthesis by aquatic macrophytes within MIS 7 and the Holocene, leading to increased δ13C values of bulk OM and of long-chain n-alkanes. Hence, the δ13C logs were ideal for studying the contribution of aquatic macrophytes to the lipid and isotopic composition of sediments and for the reconstruction of palaeoenvironmental conditions. These results confirmed that C4 plants had a low presence in the PB. Comparison with biomarker analysis and pollen data of the PB and other records of the Southwestern Mediterranean revealed that δ13C values of bulk OM and of long-chain n-alkanes reflected global climatic oscillations during MIS 7 and the episodes Heinrich Events 3, 2, 1 and Younger Dryas. 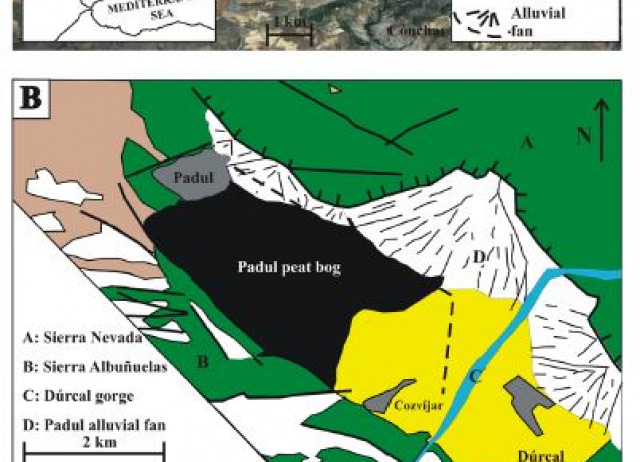 Could climate change benefit invasive snakes? Modelling the potential distribution of the California Kingsnake in the Canary Islands

The interaction between climate change and biological invasions is a global conservation challenge with major consequences for invasive species management. However, our understanding of this interaction has substantial knowledge gaps; this is particularly relevant for invasive snakes on islands because they can be a serious threat to island ecosystems. Here we evaluated the potential influence of climate change on the distribution of invasive snakes on islands, using the invasion of the California kingsnake (Lampropeltis californiae) in Gran Canaria. We analysed the potential distribution of L. californiae under current and future climatic conditions in the Canary Islands, with the underlying hypothesis that the archipelago might be suitable for the species under these climate scenarios. Our results indicate that the Canary Islands are currently highly suitable for the invasive snake, with increased suitability under the climate change scenarios tested here. This study supports the idea that invasive reptiles represent a substantial threat to near-tropical regions, and builds on previous studies suggesting that the menace of invasive reptiles may persist or even be exacerbated by climate change. We suggest future research should continue to fill the knowledge gap regarding invasive reptiles, in particular snakes, to clarify their potential future impacts on global biodiversity. 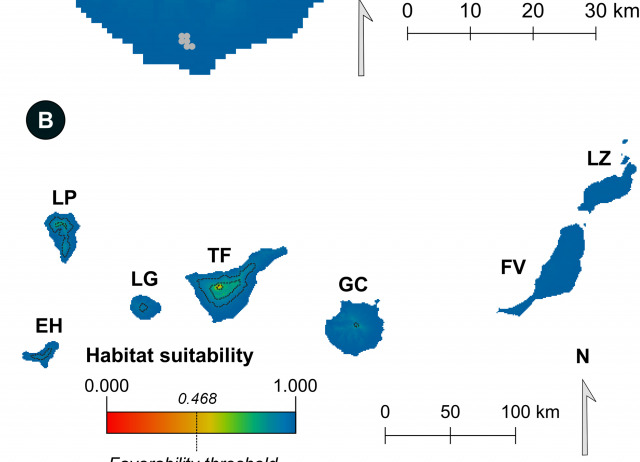 The Anadarko Basin of Oklahoma represents a major Paleozoic depocenter that existed along the rifted margins of southwestern Laurentia. In its infancy it accumulated a thick series of Cambrian through Mississippian detritus while further subsidence caused by inversion of the Cambrian Southern Oklahoma Aulacogen resulted in voluminous Pennsylvanian to Permian sediment. This contribution reports new data on K-Ar ages and trace-element geochemistry of detrital illite from middle and upper Pennsylvanian shale used to reconstruct sediment origins at the peak period of subsidence of the Anadarko Basin. X-ray diffraction was used to unveil mineral compositions and abundances of illite polytypes in two size fractions of separated illite (˂1 and 2-1 μm). K-Ar isotopic analyses were completed for both fine fractions, while the laser ablation inductively coupled plasma mass spectrometry was done for the latter. All illite separates consisted of mixtures of authigenic (1Md) and detrital (2M1) illite. The Illite Age Analyses showed that the detrital age of Desmoinesian (Moscovian) shale is the late Ediacaran (584 Ma), while the age of Missourian (Kasimovian) shale is the middle Cambrian (512.5 Ma). Trace-element abundances of all analyzed illite, irrespectively of stratigraphic age, are consistent with those of mica from metamorphic rocks. Based on illite detrital age and geochemistry it was inferred that Desmoinesian (Moscovian) shale represents a mixture of Neoproterozoic and Cambrian detritus sourced locally, whereas Missourian (Kasimovian) shale records a provenance shift toward more distal easterly sources from the Ouachita-(Marathon) foreland. This study has proposed a sediment source transition between the middle and upper Pennsylvanian that likely reflected major changes in the basin paleogeography and progressive development of the east-west (transcontinental) fluvial systems. 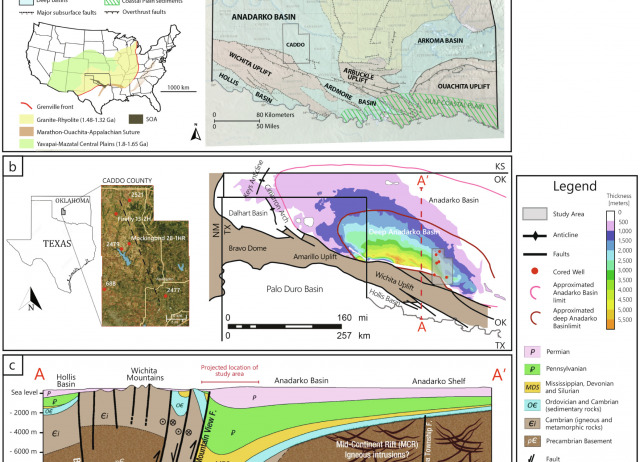 Four cyclic octapeptides, squamins C–F, were isolated from the seeds of Annona globiflora Schltdl. These compounds share part of their amino acid sequence, -Pro-Met(O)-Tyr-Gly-Thr-, with previously reported squamins A and B. Their structures were determined using NMR spectroscopic techniques together with quantum mechanical calculations (QM-NMR), ESI-HRMS data and a modified version of Marfey's chromatographic method. All compounds showed cytotoxic activity against DU-145 (human prostate cancer) and HeLa (human cervical carcinoma) cell lines. Clearly, A. globiflora is an important source of bioactive molecules, which could promote the sustainable exploitation of this undervalued specie. 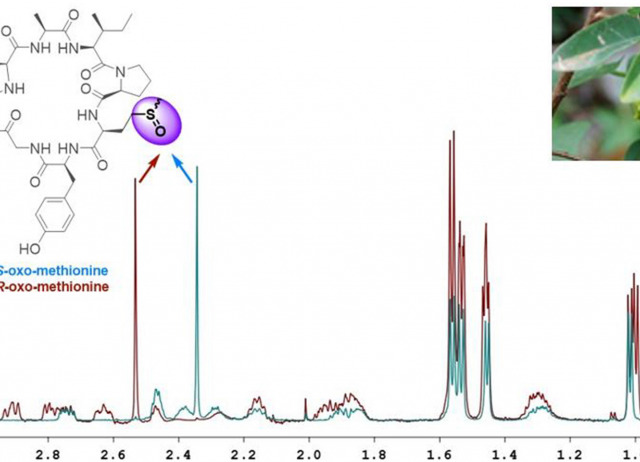 A novel organocatalytic multicomponent cyanovinylation of aldehydes was designed for the synthesis of conjugated cyanomethyl vinyl ethers. The reaction was implemented for the synthesis of a 3-substituted 3-(cyanomethoxy)acrylates, using aldehydes as substrates, acetone cyanohydrin as the cyanide anion source, and methyl propiolate as the source of the vinyl component. The multicomponent reaction is catalyzed by N-methyl morpholine (2.5 mol%) to deliver the 3-(cyanomethoxy)acrylates in excellent yields and with preponderance of the E-isomer. The multicomponent reaction manifold is highly tolerant to the structure and composition of the aldehyde (aliphatic, aromatic, heteroaromatics), and it is instrumentally simple (one batch, open atmospheres), economic (2.5 mol% catalyst, stoichiometric reagents), environmentally friendly (no toxic waste), and sustainable (easy scalability). 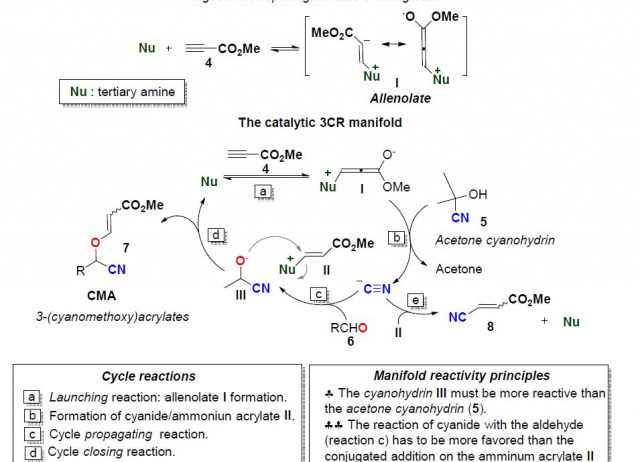 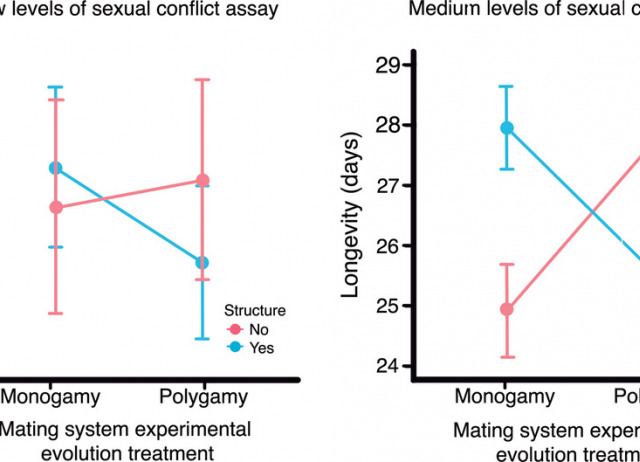 Biomaterials-mediated bone formation in osteoporosis (OP) is challenging as it requires tissue growth promotion and adequate mineralization. Based on our previous findings, the development of scaffolds combining bone morphogenetic protein 2 (BMP-2) and matrix metalloproteinase 10 (MMP-10) shows promise for OP management. To test our hypothesis, scaffolds containing BMP-2 + MMP-10 at variable ratios or BMP-2 + Alendronate (ALD) were prepared. Systems were characterized and tested in vitro on healthy and OP mesenchymal stem cells and in vivo bone formation was studied on healthy and OP animals. Therapeutic molecules were efficiently encapsulated into PLGA microspheres and embedded into chitosan foams. The use of PLGA (poly(lactic-co-glycolic acid)) microspheres as therapeutic molecule reservoirs allowed them to achieve an in vitro and in vivo controlled release. A beneficial effect on the alkaline phosphatase activity of non-OP cells was observed for both combinations when compared with BMP-2 alone. This effect was not detected on OP cells where all treatments promoted a similar increase in ALP activity compared with control. The in vivo results indicated a positive effect of the BMP-2 + MMP-10 combination at both of the doses tested on tissue repair for OP mice while it had the opposite effect on non-OP animals. This fact can be explained by the scaffold’s slow-release rate and degradation that could be beneficial for delayed bone regeneration conditions but had the reverse effect on healthy animals. Therefore, the development of adequate scaffolds for bone regeneration requires consideration of the tissue catabolic/anabolic balance to obtain biomaterials with degradation/release behaviors suited for the existing tissue status. 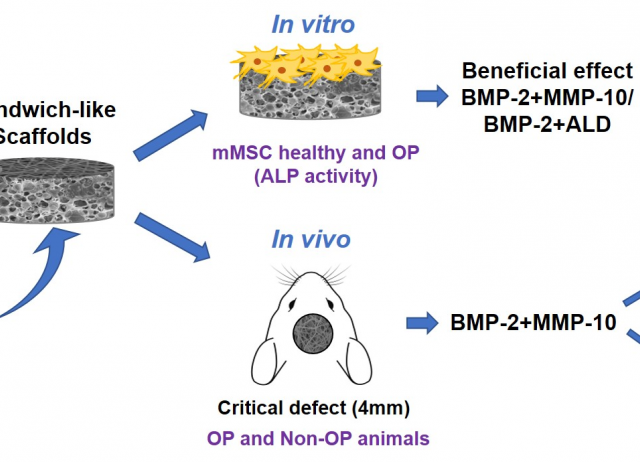 Interaction frequency is the most common currency in quantitative ecological networks, although interaction quality can also affect benefits provided by mutualisms. Here, we evaluate if interaction quality can modify network topology, species' role and whether such changes affect community vulnerability to species loss. We use a well-examined study system (bird–lizard and fleshy-fruited plants in the ‘thermophilous' woodland of the Canary Islands) to compare network and species-level metrics from a network based on fruit consumption rates (interaction frequency, IF), against networks reflecting functional outcomes: a seed dispersal effectiveness network (SDE) quantifying recruitment, and a fruit resource provisioning network (FRP), accounting for the nutrient supply of fruits. Nestedness decreased in the FRP and the SDE networks, due to the lack of association between fruit consumption rates and 1) nutrient content and; 2) recruitment at the seed deposition sites, respectively. The FRP network showed lower niche overlap due to resource use complementarity among frugivores. Interaction evenness was lower in the SDE network, in response to a higher dominance of lizards in the recruitment of heliophilous species. Such changes, however, did not result in enhanced vulnerability against extinctions. At the plant species level, strength changed in the FRP network in frequently consumed or highly nutritious species. The number of effective partners decreased for species whose seeds were deposited in unsuitable places for recruitment. In frugivores, strength was consistent across networks (SDE vs IF), showing that consumption rates outweighed differences in dispersal quality. In the case of lizards, the increased importance of nutrient-rich species resulted in a higher number of effective partners.

Our work shows that although frequency strongly impacts interaction effects, accounting for quality improves our inferences about interaction assembly and species role. Thus, future studies including interaction outcomes from both partners' perspectives will provide valuable insights about the net effects of mutualistic interactions. 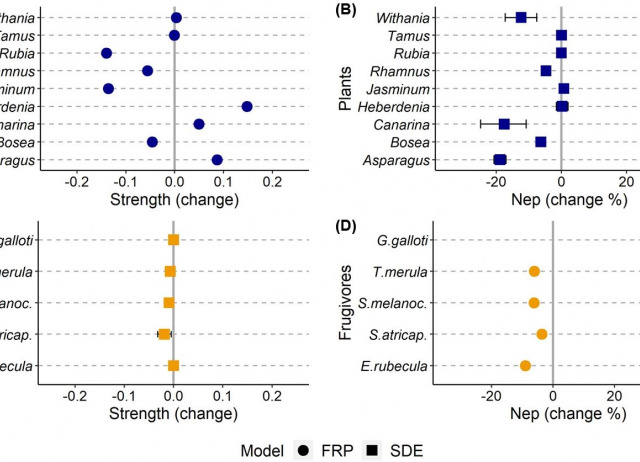